We all like to save money. Whether it's finding a gas station with the best price or your favorite beer on sale, saving a few dollars feels good. Public entities like schools or police and fire departments have fiscal responsibilities that mandate against wasteful spending. Most individuals and certainly most agencies shop carefully when purchasing supplies. Medical equipment is not the place to try to save a few dollars. You would never purchase a bargain parachute or sign up for budget brain surgery.

When it comes to emergency medical equipment, most of us know better than to price-shop, yet thousands of fake “CAT” tourniquets are sold on Amazon, eBay, and similar sites. The genuine C-A-T (Combat Application Tourniquet) made by North American Rescue, is favored and proven by Combat Medics, used in Stop The Bleed kits, and is deemed 100% effective by the U.S. Army Institute of Research. Special Operations Forces, many Federal Law Enforcement agencies, and countless Police Departments and State Patrols carry a CAT Tourniquet with them every day.  You can get yours at Just In Case Rescue along with a nice Trauma Kit.

How do you know if you are buying a “real” CAT Tourniquet?

Many of the fake CAT Tourniquets appear legitimate and could pass a casual inspection. But they are not reliable due to the quality of materials used and the methods of production and assembly. Counterfeit tourniquets are known to fail — the windlass may break off in your hand or bend so that it cannot be secured, the buckle may fail, and internal stitching can come apart. If the tourniquet fails, severe bleeding will resume, endangering the injured person and decreasing their chance of survival.

These fakes were more prevalent a few years ago, when the Generation 6 Combat Application Tourniquet was the latest version. Even Law Enforcement and First Responders were getting fooled by them. In 2013, New Hampshire first responders experienced a “catastrophic failure” when two counterfeit tourniquets failed at the scene of a motorcycle accident. Similar stories were alarmingly common at the time, and these things still happen, though not as frequently.

When the CAT Generation 7 appeared, it made the counterfeiters’ jobs somewhat harder. The Gen 7 windlass is more robust and has deeper ribbing. There is a distinctive single-feed routing buckle with raised “CAT” lettering, which few, if any, fakes have been able to mimic very well. The same raised lettering appears on each end of the windlass, just below the ribbing. Perhaps the biggest “tell” is the sonic welding that binds the buckle to the strap. The majority of fakes are sewn, instead of having the sonic welds shown in the picture below.

These are some of the first things you want to look for in a genuine Generation 7 Combat Application Tourniquet. 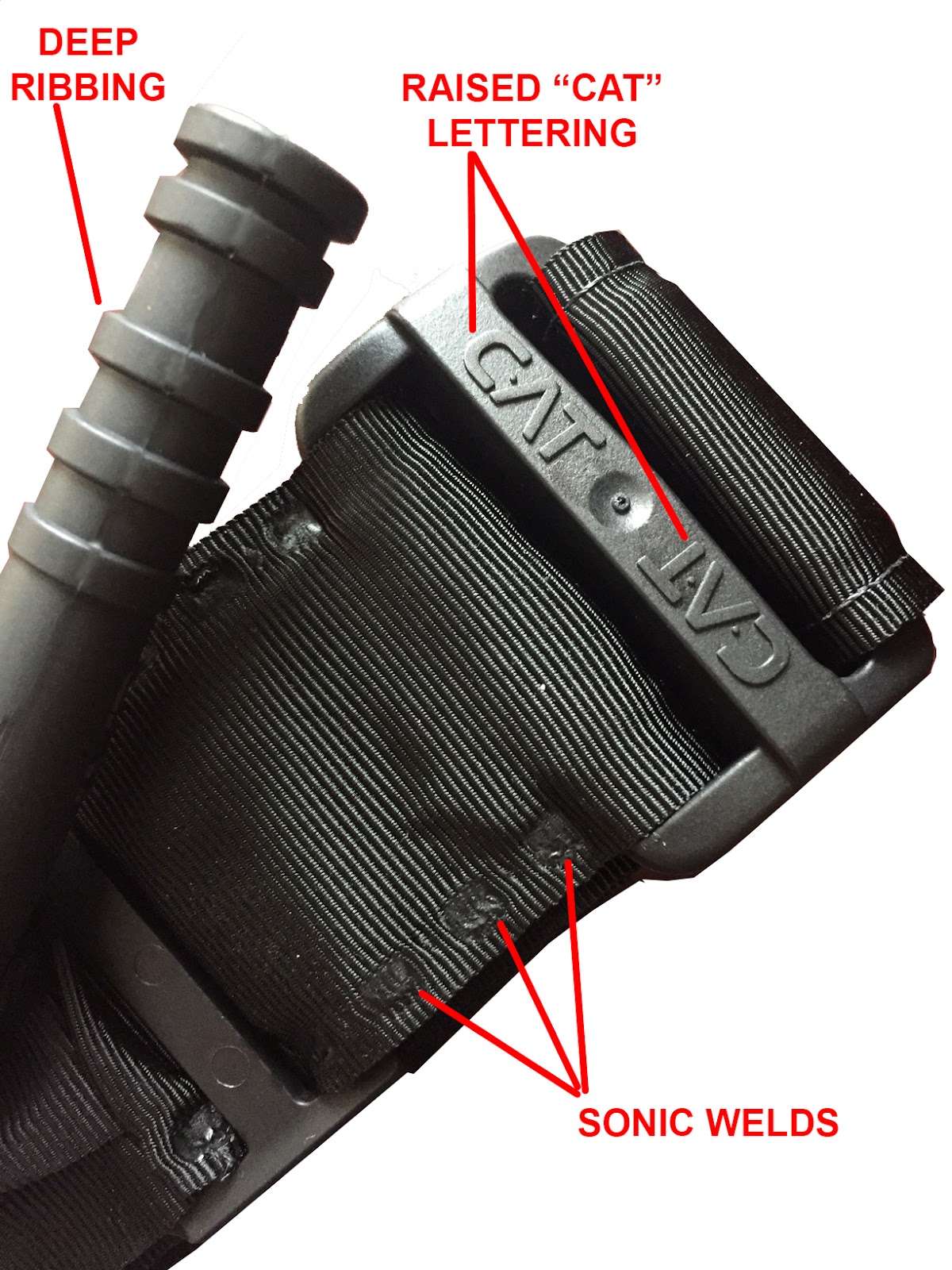 Someone’s life may hang in the balance, so if you have a CAT Tourniquet in your IFAK or Trauma Kit, please spend a few minutes to assure yourself that it is the real item. If you are shopping or planning to shop for a tourniquet or a kit containing a CAT tourniquet, use a reputable, authorized dealer of North American Rescue products and avoid the discount resellers who populate Amazon, eBay, and other “bargain” websites.

Expect to pay $27 - $39 for the genuine product. If you are paying less than $20, it is a near certainty that you are purchasing a counterfeit. With so much at stake, this is not the time to try to save a few dollars.